Four-Limbed Stick Pose, combining plank and a reverse push-up into a posture that we sometimes try to avoid, but which is a full body workout all on it’s own and often used as part of a Vinyasa transition from standing to floor work, as well as in Sun Salutations.

What are we working on during chaturanga? 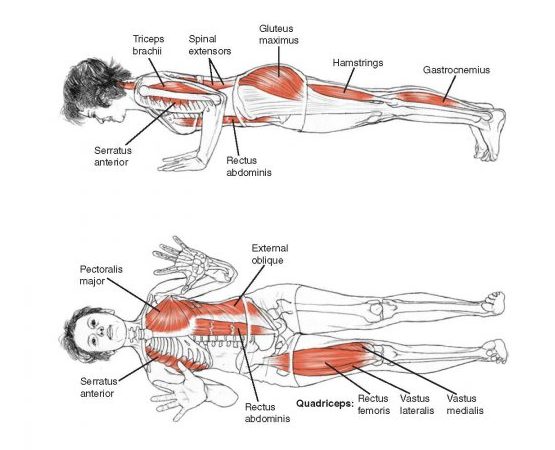 The most obvious areas are core and arms as we move from plank down into holding chaturanga (or in some cases into collapsing onto the floor). This posture truly is an entire body workout if done correctly, using all the muscles along both the front and back of the body. To enable your body to keep a straight line, the legs, arms, back, and front all need to be working together to keep the tension to be able to hold this pose.

What are the key steps for chaturanga?

There are two ways to get into chaturanga. The most common is from the plank position. Placing your hands under your shoulders, push up away from the mat into Plank. With the ankles, hips and shoulders all aligned, keep the legs active by pushing through your feet and out your heels. You should be creating a perfectly straight line with your body.  From this position, lowering your body down, keeping your elbows in until your biceps are parallel to the floor.

The second way is to push-up directly into chaturanga. This is much harder as you don’t get the time in plank to get your alignment right. To push-up into chaturanga, engage your core and pop your hips and upper body up off the mat at the same time. We often try and lift the chest and then the hips, as this is easier. This can lead to injuries. Especially in your lower back and it is important that when trying to push-up into chaturanga that you have the core strength to lift your hips and shoulders together.

Dropping the knees. Whether in plank or in full chaturanga, and whether lowering down or pushing up it is often best to drop the knees and work on your alignment and core strengthening first. Be careful when dropping the knees to keep the chest and hips in a straight line as you lower down, not letting either hit the mat first.

Using your forearms. Instead of holding using your hands, you can place your forearms flat on the mat, holding your body in a straight line just off the ground. This is a modified plank pose which is great when you have weak wrists or any injuries.

What should I be doing with my breathing?

When popping up into chaturanga, inhale to pop up and then exhale to hold the pose.

Other pointers and tips

There are a quite a few watchouts for chaturanga:

5 thoughts on “Breaking Down the Poses – Chaturanga Dandasana”