When Faye was a tiny baby, I never really appreciated the fact that even though we were waking up every hour or two to feed her, the rest of the time she was pretty complacent. Fast forward 14 months and we now have a little terror who never sits still.

Going into this motherhood thing, I was fully expecting to be tired, mostly just for the first few months. To have days where it all got too much, but over all to just be able to continue on pretty much as normal. Even though I knew from friends and family how time consuming and exhausting being a mother is, I still don’t think I really understood it until I’ve had to do it!

As an adult, we expect to get between 5 – 8 hours of uninterrupted sleep at night. We dream of the days when we were able to have naps during the day and often can think of nothing better than snuggling down in bed with a book and a cup of tea (or at least I can’t).

As a toddler, it appears sleep is optional. Naps – who needs those? They just keep going until they are so tired they can’t even stand anymore without falling over. Even then they will scream and fight you with everything they have left (which is often more than you think possible) until finally either you give up and leave them to keep playing, and falling over, and crying only to keep playing OR you manage to wrestle them into bed and they suddenly just pass out. Dead to the world. A bit like you’ve managed to kill the on switch.

Evening bed times are often a repeat of the nap story. Although you are lulled into a false sense of security thinking, “Finally, they’re out until morning!”. Ha ha ha, the joke is on you. 3-4am is the perfect party time. You remember those days. The ones where you didn’t sleep at all and all you wanted to do was play in the early hours of the morning. Oh wait, you were in your early 20’s then and playing = partying. Also you hadn’t gone to bed at 8pm so were starting to run low on energy by 3am rather than being full of beans!

I keep wanting to tell her that she needs to appreciate the fact that she can sleep all the time now because soon she’ll have school, and then Uni and finally a job that won’t allow her to take afternoon naps (unless she’s really lucky).

Amongst all the fighting to go to sleep, we have discovered a natural talent for tantrums. The ones that involve falling dramatically to the floor, rolling around from one side of the house to the other, all the while screaming at the top of our lungs. 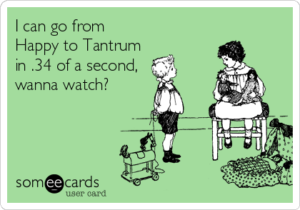 Usually these materialise when she is exhausted, but are known to pop up when hungry, or not getting our way as well.

They are so over the top dramatic that I often end up laughing at her. Which she is starting to realise is not the desired outcome, but she’s not yet sure how to respond to that.

Thankfully these are usually reserved for at home and I’ve yet to have to deal with a full on tantrum out and about. Some tears and screaming – Yes. Full Tantrum – No. Fingers crossed that if I just keep laughing at her when she rolls around on the floor it will discourage her from trying it in public!

Thankfully even though she is extremely opinionated, stubborn and knows exactly what she wants, she is still generally a super chilled happy child. My heart goes out to the mum’s who have children who are less happy/chilled than Faye. If I struggle on a daily basis you really are super women for getting through the day!