This great recipe was brought to my attention recently by my soon to be Sister-in-Law. It is fantastic. Trying to get my toddler to eat healthily is always a challenge, as well as being a Gluten Free house which makes a lot of pies and quiche’s tough to manage. This one literally disappeared and will now be a fast favourite in our house!

Preheat oven to 180
Line a pie dish with the sweet potato, covering the base and sides, brush lightly with olive oil and blind bake for 15min
While the sweet potato crust is baking, saute the onions and spinach in a little olive oil and allow to cool slightly
In a large mixing bowl, roughly beat the eggs. Adding the cheese, pepperdews and chives as well as the slightly cooled onion and spinach mixture. Season to taste
Pour the egg mixture into the sweet potato base and grate some parmesan over the top
Bake for 25 – 35 min until the egg is set
Serve warm with a side salad

The filling can be modified to include anything that takes your fancy. Switching out the cheese for different varieties, swopping the pepperdews for sun dried tomatoes and using spring onion instead of chives are just a few.

Using potato instead of sweet potato will make this a slightly heavier dish, but no less yummy

If you are not an egg fan, use 3 instead of 4, although this is not an eggy tasting dish

Instead of spinach, you can use any spring/summer greens or cabbage. 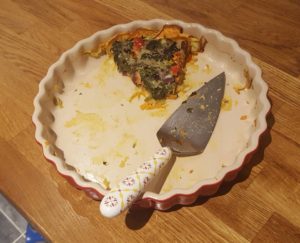 Thanks @zeezeequeue for the super recipe!